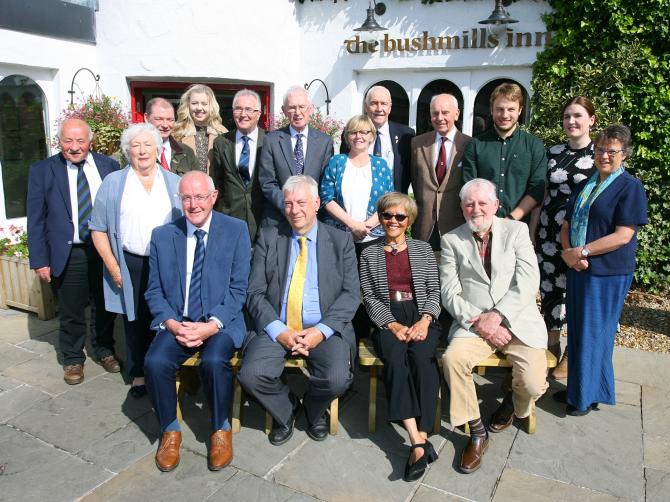 THE Northern Ireland War Memorial (NIWM) is a registered charity and accredited museum in Belfast's Cathedral Quarter.
The NIWM commemorates the men and women of Northern Ireland who died in the First and Second World War.
They seized this opportunity to meet local artist, James McKendry, who was commissioned by the NIWM back in 1960 to create two large copper friezes for the original War Memorial building which opened on Waring Street Belfast in 1963.
The copper friezes are 30 feet in length each and they are on display in the museum which relocated to Talbot Street in 2008.
The upper frieze records the presence of the United States military in Northern Ireland from 1942 to 1944.  US soldiers are shown training in the countryside in Northern Ireland under a 48-star US flag. The artist depicts airfields, the Causeway headlands, Port Moon Bay, a traditional Ulster five-bar farm gate and an Antrim round tower. The troops are shown progressing from left to right, disciplined and ordered, equipped with weapons and armaments, ready to embark for the Normandy landings.
The lower frieze illustrates the war effort of men and women on the home front. Depicted left to right are farmers gathering flax and corn, a woman weaving, stone masons rebuilding Belfast after the air raids, a barrage balloon tethered above a linen mill, a fishing boat, a shipbuilding crane, heavy engineering, a welder at work and a countryside scene which includes ‘the steeple’ in Antrim.