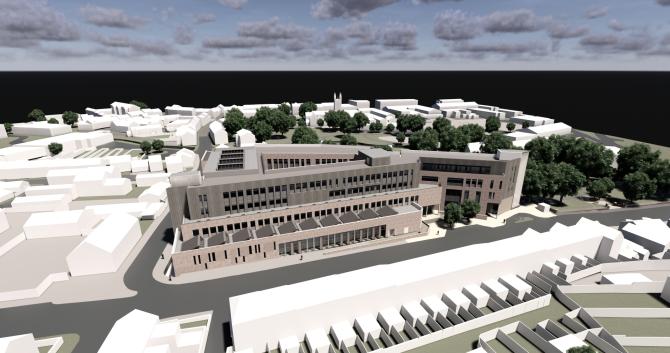 THE council has granted planning permission to redevelop the Northern Regional College in Coleraine into an all new state of the art facility.
The  current site, which is located on the edge of the town centre, is set to be demolished with an all-new four storey building set to be developed. The modern campus will have a central courtyard with main entrances from Anderson Park and Union Street.
The new plans, which were approved on Wednesday, June 27 at the council's planning committee were well received. Councillors voted unanimously in favour of the planning application for the new building. The design is hoped to uplift the current site and will be made up of a number of modern design techniques including a flat roof to minimise the scale and height of the new design. Facing brick, metal cladding and glass will also be used in order to achieve a modern look.
St. Patrick's Parish Centre, which is beside the current NRC building, is also set to be included as part of the new development proposal. The old school house is a listing building, therefore, developers must retain the current structure. The grade B listed building will be retained and refurbished to become a Performing Arts Studio / Theatre as part of the Creative Industries Faculty within the modern facility.
The planning application highlights that a single storey glazed extension is proposed to the side of the existing building.
The disused football pitch on Brook Street will also be included within the new development. During the latest meeting of the council's planning committee, it was said that the pitch has been disused for 16 years but will be redeveloped into a large car park, which will benefit the modern campus.
The parking area will provide 212 car parking spaces to include 8 disabled spaces and an area of open space. Provisions have been put in place for the car park to be broken up with hedging and tree planting in order to improve the appearance of the new facility.