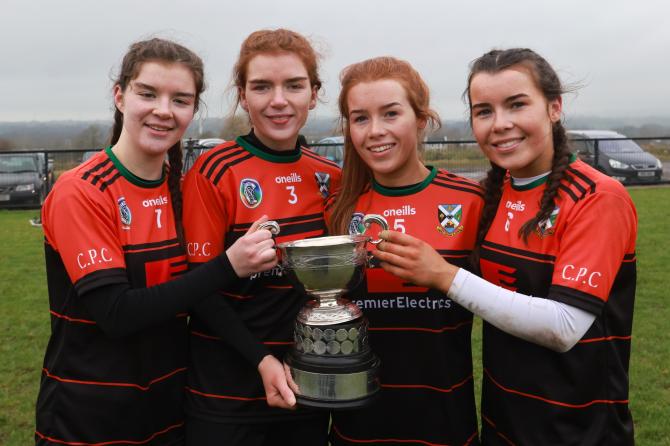 The Magill twins - Brónach and Brid - with the McIntosh twins Elen and Fay (right) with the trophy after their team's win over St Louis. Pic by John McIlwaine.

CROSS and Passion Ballycastle won their seventh Corn Uan Uladh camogie title at Quinn Park Ballymena but not before they were pushed to the limit with the game going into extra time.

With the sides level, the St Louis girls looked to have made up for all the heartbreak of the past, particularly that two point defeat of four years ago when substitute Maria Gatley flicked a Ciara O’Boyle cross to the Ballycastle net with time almost up.

With a 71 year gap apparently bridged, celebrations were just about to begin but they were hit with even greater heartache when referee Mickey Quigg disallowed the score for a ‘square-ball’ infringement sending the game into extra-time.

That decision clearly deflated the Ballymena girls as Cross and Passion took control during the opening half of extra time to race into a three point lead with a goal from Cassie McArthur early in the second period putting the game beyond reach of the Kintullagh girls.

Full report and photos in The Chronicle.