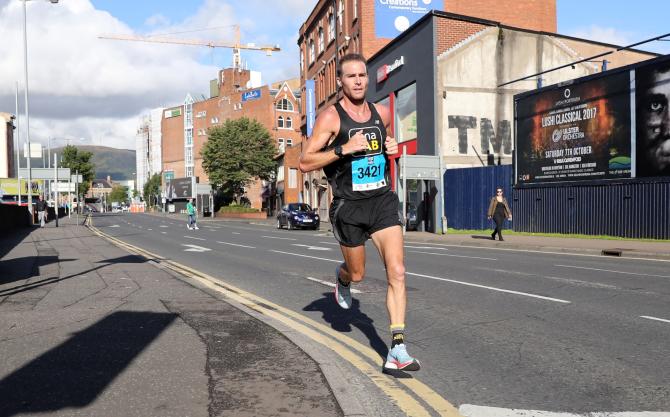 Stephen Scullion taking part in the Belfast City Half Marathon in 2017.

OLYMPIAN Stephen Scullion says he has learned to cope with the disruptive mental health problems that have plagued his last few years ahead of the Commonwealth Games this summer.
The Team Northern Ireland long-distance runner opened up about the behind-the-scenes turmoil that caused him to temporarily withdraw from the Olympics last summer.
But the 33-year-old believes he has turned a corner through work with therapists and group training sessions, and is hellbent on fulfilling his enormous potential.
With the opening ceremony for the Games just days away, Scullion is enthusiastic about his preparation, part of which is being spent in Switzerland for altitude training.
He said: “This is by far the most consistent and well planned build up. I’ve run more than I’ve ever run. I’ve been at altitude longer than I’ve ever been at altitude.
“I’ve actually stuck to a plan which, God that’s the biggest miracle of all. And so I’m very optimistic about my chances of a really strong performance in Birmingham.
“I actually thought about Tokyo the other day and I thought, wow what a different build up that was. Pre-Tokyo I was on sleeping tablets, really struggling and crying a lot.
“Now I’m not struggling to sleep, my sleep’s brilliant and my happiness is on a completely different scale.”
“I think I’m the best I’ve been in a long time.
“When I really was struggling with mental health, probably at its peak, I kind of assumed I’d still be able to train and operate and perform at the highest level.
“For people watching on, they probably saw me as this ticking time bomb. But for me it didn’t feel like that.
“It felt like I knew things weren’t quite right, but I thought by all accounts I’d be able to perform.
“It’s only looking back because I’m in a much, much better place that I can probably see what everybody else could see.”

This summer, Team Northern Ireland, supported by funding raised by National Lottery players, will comprise of over 100 athletes, and having secured his place on the squad, Scullion is looking for medal success.

And with the Birmingham 2022 Commonwealth Games set to inspire people and communities across the country this summer, Scullion hopes sharing his story will give others motivation to get involved in sport and turn their dreams into reality.
The Belfast-born athlete notes that the problems haven’t disappeared completely, but that he has developed strategies and an awareness to deal with them.
He said: “I’m still the exact same person. There’s still impulsivity. There’s still overreaction to certain things. There’s still sensitivity to certain things.
“There’s still sometimes lack of emotional control. But then I’ve been taught by therapy all these coping mechanisms.
“One of the biggest changes in the last year is just an awareness of when I’m likely in that sort of headspace. And instead of going down the rabbit hole I notice it quite quickly.
“It’s just a moment and you can just let it go. Whereas in the past I probably wasn’t very good at that. Bad moments became bad months. That’s when you start really struggling.
“I can recognise when I wake up if such thing as a fire alarm were to go off in my head that I’m about to have a meltdown or a bad day, I can kind of laugh about it now, like oh here we go, it’s going to be one of those days.”
Scullion ran a personal best of 2:09:49 at the London Marathon in October 2020 coming home in 11th, just a month after setting a personal best of 1:01:08 in the Larne Half Marathon.
But with a newfound motivation to stick to training plans, the Team Northern Ireland star is convinced they won’t stay personal bests for long.
“It will come across as very arrogant, but I’ll rewrite all these times in the next year or two,” he added.

“I’ve always been the exact same potential athlete.
“But I guess where I struggle would be I could never string together three to four months of good training, the right training, a good mindset, all these things.
“I’ve spent the last two months training with a group from Australia, some of the best athletes in the world.
“Any results that have gone well, like September 2020 or October 2020 are built on when we managed to get me focused for two months.
“But now what the goal will be is, well hey, if that’s what you could do with two months of good focus, what could you do with one year, two years, three years towards the next Olympics.”
National Lottery players raise more than £30million a week for good causes including vital funding into sport – from grassroots to elite. Find out how your numbers make amazing happen at: www.lotterygoodcauses.org.uk and get involved by using the hashtag: #TNLAthletes.