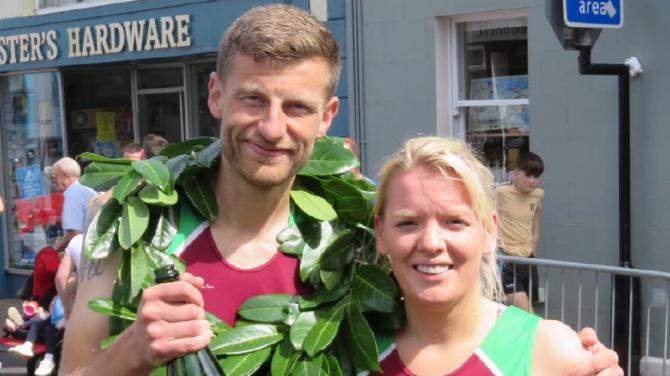 The annual Lurig Run took place on Saturday, one of the highlights of the Heart of the Glens festival and a much anticipated event in the mountain running calendar.

With a couple of days to go the race was in jeopardy due to exceptional levels of rainfall, but the mountain held up well and the course passed final inspection on Saturday morning, with the weather set fair for the race.

Conditions ensured that the course record of 26.05 was never under threat and neither it transpired was Jonny Steede’s dominance of this event.

The Glens Runner came home in 29.33 with over 40 seconds to spare on second placed Jonathan Scott (Mourne Runners). It was the Steede’s third Lurig title in a row and his fourth in total.

He even had time for a bit of showboating, crossing the line backwards and bowing to the great delight of the hundreds of spectators.

Ballycastle’s Gemma McDonald continued a stellar year by taking the ladies crown in 37.00, showing that she is as adept on the mountain as she is on the road. Second was Lucy O’Dell of the Glens Runners, always a strong performer in her home event.

The ladies team prize remained with the Glens Runners for another year with Lucy O’Dell, Clare Fyfe, Rachael McLaughlin and Catriona O’Connor bringing it home.

Rachael, a junior competing in her first Lurig Run is surely one to watch for the future.

The Lurig Run is always a special day for the competitors, people of the Glens and the many tourists witnessing it for the first time; it is an integral part of the Heart of the Glens festival and much cherished by the community that hosts it. Roll on 2020!