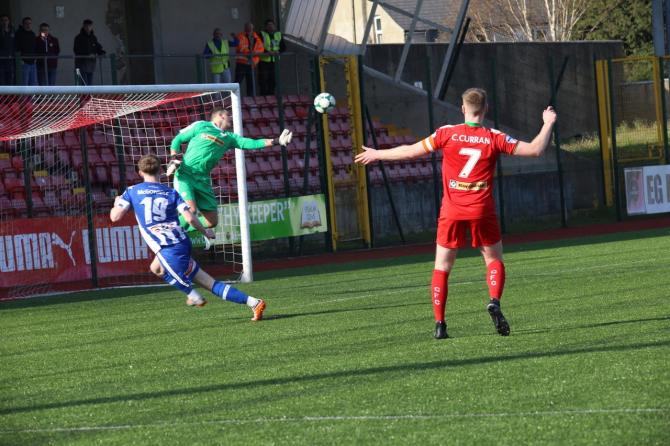 DEFENSIVE errors - a common phrase that is plaguing Coleraine this season as they slumped to a third successive defeat at the hands of Cliftonville last weekend.

The stark reality is that the Bannsiders have conceded 27 goals in their last 16 games in all competitions - a far cry from just the 31 goals they conceded in the entirety of last season’s Danske Bank Premiership campaign.

In truth, the Stripes were terrific going forward during the fixture against Paddy McLaughlin’s side and will feel like they should have taken something away from the fixture.

However, the manner of which Coleraine conceded their goals will be a huge frustration for boss Rodney McAree.

There was a blow to the squad before kick-off as midfielders Josh Carson, Jamie Glackin and Stephen Lowry were all ruled out through injury, with Aaron Canning also suspended.

The home side made a bright start at Solitude and threatened after just two minutes when Rory Donnelly arrowed wide from Chris Curran’s quick throw in.

The visitors took the lead with their first venture forward as neat build-up play involving Cormac Burke and Ian Parkhill released Steven Douglas on the right-hand side. The experienced defender looked up and knocked the ball across the box for Jamie McGonigle to pounce from close range on nine minutes.

Unfortunately, that lead didn’t last long as on 13 minutes Dean Shiels was caught in possession by Ryan Curran who fed the ball into the path of Rory Donnelly who powered home past Chris Johns.