100 days to go until The Open tees off 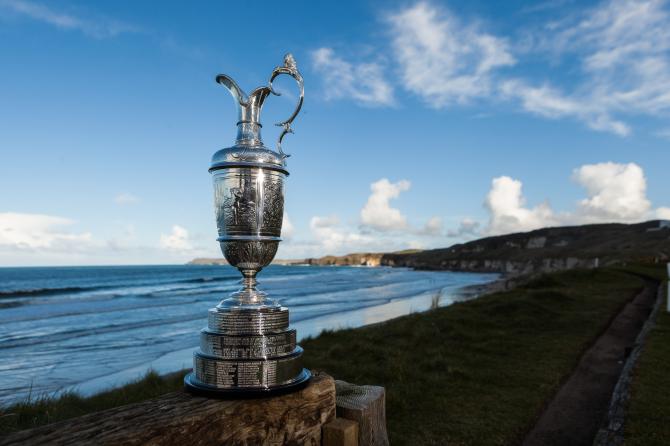 The Claret Jug, one of the most famous trophies in sport, sits proudly overlooking the White Rocks during last week’s Media Day at Royal Portrush. The event gets underway exactly 100 days from today

FORMER Open champion Rory McIlroy admits he has thought about what it would feel like to lift the Claret Jug on home soil.

And the 29-year-old, who won the title at Royal Liverpool in 2014, acknowledges that it would be the realisation of a long-held dream.

“It would be a dream come true to win The Open here,” he said during a video presentation played to members of the world’s media at a Media Day at Royal Portrush Golf Club.

“I admit I have thought about it - it’s going to be incredible.

“I can’t for it,” added McIlroy who aims to complete the ‘Grand Slam’ by winning The Masters in Augusta this weekend.

With just 100 days to go until the first tee shot is hit, ending an almost 70 year absence since The Open was last played here, 15,000 extra tickets will go on sale next Tuesday.

The move comes after tickets for all four days of the championship sold out months ago.

The R&A has extended the capacity on each of the four championship days by 3,750, meaning 43,750 spectators will be at the north coast venue each day.

An estimated total of 215,000 spectators will now attend the championship across the week, making The 148th Open the single biggest sports event ever staged in Ireland.

“We recognise the huge demand from golf fans so we are pleased and excited to release more tickets,” said a spokesperson for The R&A.