Life through a lens 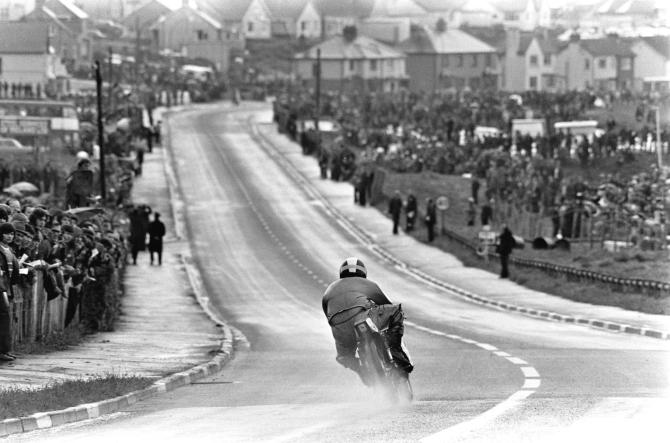 The start and finish area in the late seventies: no chicanes in those days.NW200-34s

THE North West 200, as we all know by now, celebrates its 90th anniversary this year.

Riders and teams have come and gone, changes have been made to the course, but one constant remains: photographer Clifford McLean.

For over 50 years, the Ballymoney man has chronicled the highs and lows of the event, his pho- tographs capturing the drama of one of Northern Ireland’s premier sporting events.

The now retired electrical engineer started out in 1967 and went on to record the careers of household names of the sport.

His photographs have become a part of history, so much so that people call to his door in Ballymoney to this day, looking a copy of a particular photograph.

Unfortunately, time has caught up with Clifford and he has taken something of a back seat in recent years, but his images endure.

“I started taking pics in 1967,” recalls Clifford in his office in his home, not far from the course with which he is most associated.

“I was there in 1966, behind the ropes and taking a few photos, so out of the blue I wrote to Motorcycle News asking them if they needed anyone to take shots for them.

“The next thing, I got a letter back asking me if I could do the North West for them?

“It would never happen in this day, but that’s how I got started,” he adds.

Clifford never looked back, quickly establishing himself as the foremost authority in motorcycle racing photography and criss-crossing the country in his pursuit of the perfect photograph.

“Derek McIntyre from Ballymoney - him and me we clubbed together and I ended up doing it,” con- tinues Clifford.

“I worked for MCN for about 20 years. I was doing scrambles in the summer, trials in the winter and road races in the summer. I was away nearly every Saturday and then other magazines came in.

“I was working as an electrical engineer with NIE at the time so I had no time to myself. I continued doing what suited me up until about five years ago when I stepped back.”

Back then, when he started out, things were a little bit different to what they are today when everyone with access to a smartphone is a photographer.

“Film was the worst,” laughs Clifford.

“If I was at the Ulster Grand Prix or a road race anywhere except the NW200, all the other road races that we did that none of the journalists were over for, I had to go to the airport, go to BAE Cargo where the films went in the cockpit along with the pilot!

“They were then picked up by courier at the other end and went to MCN headquarters where they were developed which was some arrangement.”

These days, of course, things are much simpler thanks to the advent of digital photography and the internet, but Clifford is quick to praise his good friend and colleague, Stephen Davison, for his help in moving with the times.

“Stephen’s been very good to me,” admits Clifford.

“He got me converted to digital and taught me how to use it and a computer.

“I wouldn't give in to digital at the start, you couldn’t have got me to change, but I’ve never looked back.”

Asked to look back, however, Clifford can remember details about almost every single photograph he has ever taken around the Triangle course.

He admits that from a photographer’s point of view things have changed but accepts that that is things have to be in this day and age where health and safety calls the shots.

“You only have to look at some of those old photographs to see how things have changed,” he says.

“The people on the footpath on The Promenade in Portstewart, the old start and finish area in front of what is now the York Hotel, the Metropole with thousands of people crammed onto the hill, spectators on the bridge at Dhu Varren – all those things that you don’t see now or never will again.

“For me, part of the trouble with taking photographs now is that there is no background, it’s all bare. There are no people in the background which helps to make the photo. I would love to see it the way it was, just once…”

Clifford is a less frequent visitor to the event these days, not because of any falling out but simply because of advancing age.

“I haven’t been down for about five years now,” he concedes.

“There’s been no falling out and Mervyn is always asking me to come down but, to be honest, I just couldn’t last the whole day.”

Despite his continuing absence, however, Clifford McLean will always retain a presence at the North West 200 thanks to his iconic images.