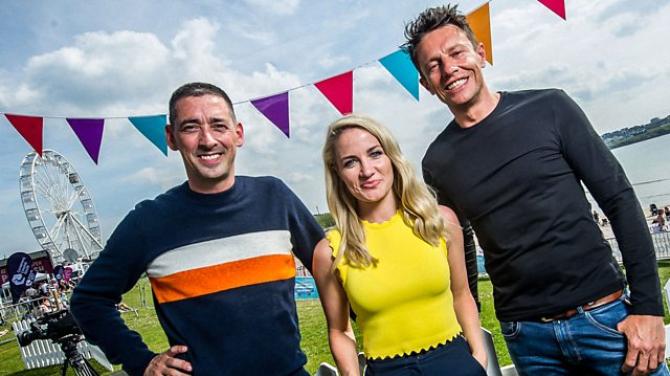 Stephen Clements (right) pictured with Colin Murray and Holly Hamilton on the 'Open for Summer' set in Portrush.

TRIBUTES have been paid to esteemed broadcaster Stephen Clements who passed away suddenly this morning aged 47.

He was one of the main presenters on BBC Northern Ireland's 'Open for Summer' show which was broadcast live from Portrush during the week of The Open golf championship last summer.

Messages of condolence have appeared online from across the media world and further afield this afternoon.

Mr. Clements, who was from Carrickfergus in County Antrim was a married father of two. He began his radio presenting career on Belfast's Citybeat, and then hosted Q Radio's Breakfast Show for seven years. In the latter half of 2019, he made the switch to the BBC where he commenced his 'dream job' taking over from veteran broadcaster Sean Coyle on Radio Ulster.

BBC Northern Ireland Director Peter Johnston said: "We are sorry to bring you the sad news of the passing of our colleague Stephen Clements.
“Our thoughts are with Stephen's family, friends and colleagues, at this difficult time.”

“Stunned to hear the dreadful news about my friend and colleague Stephen Clements. My thoughts are with his family circle.”