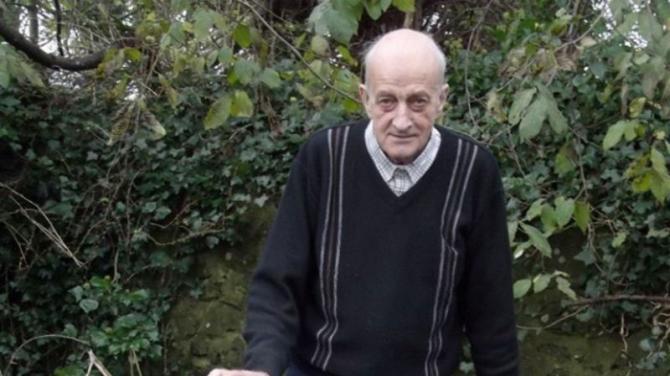 CONGRATULATIONS have been pouring in for popular Bushmills man Mr Robert Thompson who received a British Empire Medal (BEM) in the Queen's New Year's Honours.

Mr Thompson's decades of dedication to preserving the memory of those who fought in WW1 includes his series of ‘Heroes’ books, published at his own expense, including Ballymoney Heroes and Bushmills Heroes, recording the stories of those who tragically fell.

82-year-old Robert, is currently in poor health with his son John speaking on his behalf.

John Thompson said: “On behalf of my father, I would like to say how proud and humbled he is to receive this award. It is an incredible honour for the Queen to recognise how he devoted so much of his life to the commemoration and remembrance of those who died during the First World War.”

John said that due to poor health his father was unable to respond to the many messages of congratulations but assured everyone of “how much he appreciates the kind words and best wishes.”

Mr Thompson was instrumental in getting Robert Quigg VC statue erected in Bushmills, as well as getting the names put on Ballymoney War Memorial in 2000 and ensuring that Private John Meeke's grave was marked in Derrykeighan.

“Robert is the man to go to if you want help or advice on WW1,” says local historian Keith Beattie, who has known him for over 20 years, since the very first Great War exhibition he curated, with Roberts advice and assistance, in Ballymoney Museum in 1997.

“I am very pleased that my old friend has got the award. It is well deserved and recognises the many years that he dedicated to preserving the legacy of the hundreds of Causeway men who fought, and tragically died, during WW1.

“He visited their graves and memorials on the Western Front and beyond; he found their relatives and recorded their personal stories; he wrote books about them; he raised funds for memorials and he created popular exhibitions that attracted visitors from across the world. He has dedicated much of his life to this vital work. I believe this honour could not go to anyone more worthy of our praise and respect.”

Robert also wrote Bushmills Book of Remembrance, recording all those who served, from the village, with his work on Great War books about Kilrea and Cookstown also highly regarded.

Commenting, North Antrim DUP MLA Mervyn Storey said: “I could think of no one more deserving to receive just an honour, than Robert Thompson.

“Our local knowledge of military history and those who gave their lives in defence of our Nation would not be complete without Roberts the tireless work and publications. I remember speaking to Robert before going on my first visit to the Somme a number of years ago. He was a mine of information and was very helpful in locating a relative who was buried in France.

“Being honoured by the Queen in this way is a fitting tribute to someone who has served his monarch and Country well.” Local man Jim Fairbairn was also awarded a BEM.”