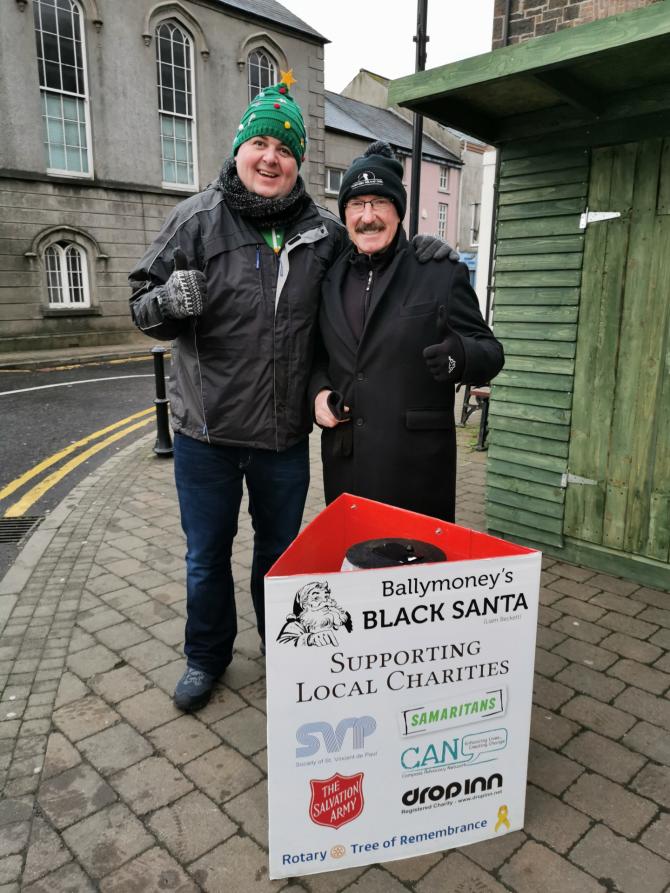 THE ANNUAL Ballymoney Black Santa sit-out got underway this morning with popular country singer Alastair Coyles stepping into the role for the first time.

The original Black Santa, the indomitable Liam Becket was there to offer Alastair his full support during this transition year.

Black Santa will be at post from today Thursday December 12 up to and including Christmas Eve.

Commenting Alastair said: “I have on all my winter woollies, hat, scarf, coats, shirt, jumper, hand-warmers the lot, but it'll be the Ballymoney public keeps me the warmest with their crack and banter.”

"We've only been here an hour and already we have got quite a few donations!"

Liam says that many of this friends from the sports and media world will be making guest appearances over the two weeks.

He added that he was hopeful that famous boxer Carl Frampton will find time to pop in.

Carl was mobbed by fans and townsfolk during his last visit several years ago.

Alastair says that some of his friends from the country music world will be popping along to High Street also.

Both men would like to say a special thanks to Ballymoney Men's Shed for making the impressive new shed which both men agree is much warmer and less prone to draughts than the previous flimsy structure.

They would also thank Mr Richard Orr for all his organisational work behind the scenes in recent years. Richard is returning to England to live and will be missed by the Black Santa team.

Both men, keen to allow Alastair to assert his own stamp on the role, had launched this year's Black Santa Appeal with a very successful 'A Night of Country Music' at Ballymoney Royal British Legion on Thursday November 28.

Alastair with Liam's support, will be raising money for the traditional Black Santa charities.

These are the Samaritans, CAN, Drop Inn Ministries, St Vincent de Paul and the Salvation Army, with one more, the Northern Ireland Children's Hospice, being added this year to make a total of six.

“We will be working even harder to ensure that all the charities get a sizeable donation,” both men concluded.