Search focused on properties between Kirk Road and Ballymoney River 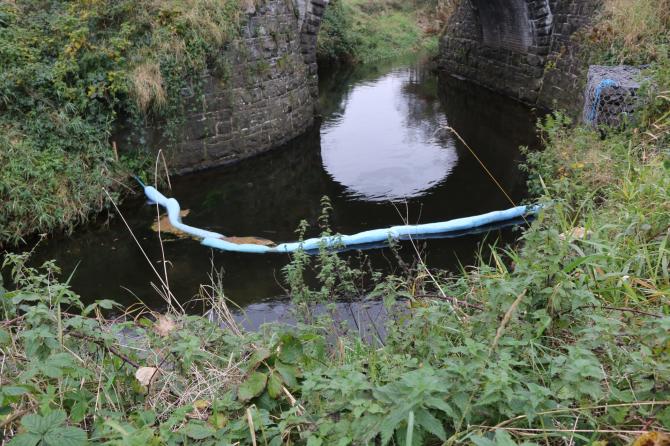 The boom put across the Ballymoney River at the railway bridge to soak up oil from a suspected heating oil leak, did not appear to be doing a very good job. WK45-AM-001

EXCAVATORS may be brought in to find a mystery heating oil leak that has confounded Northern Ireland Environment Agency (NIEA) officers, and tasked the patience of the public for well over a week.
The leak, causing a continuous slick on the Ballymoney River flowing into Riverside Park at the 'Trim Trail' end was first reported on Sunday October 27.
Since then an NIEA Water Quality Inspector has attended the scene, an absorbent boom has been put across the river, the discharge point identified and a leaflet drop undertaken urging residents in adjacent developments to check their tanks for leaks.
Speaking yesterday (Monday) a NIEA spokesperson said that current efforts are “being focused on domestic properties between the Kirk Road and the Ballymoney River.”
“They need to get their act together,” one frustrated dog walker who contacted The Chronicle, said, with another man, a resident from the Richmond area, telling The Chronicle he could smell it in his house at night with all the windows closed.

*Full report in this week's Chronicle.