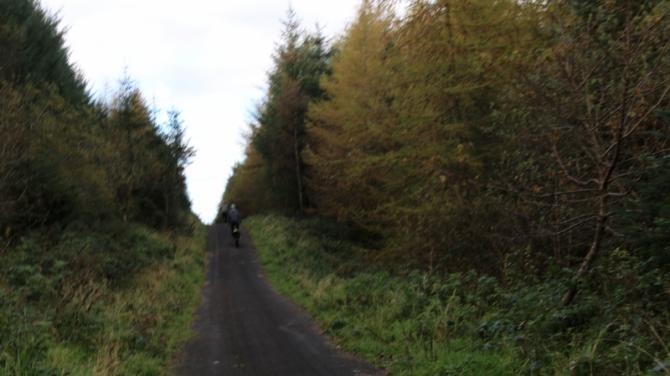 SCRAMBLER bikes have no permission to be tearing through Forest Service land and their activities will be reported to police.

So says a Forest Service (DAERA) spokesperson responding to a complaint received from a Chronicle reader whose walk in Ballycastle Forest was ruined by two young men racing along the forest roads where they and many others were out walking.

The DAERA spokesperson confirmed that riding or driving motorized vehicles off road on their property without permission is an offence.

The Chronicle received a complaint from a member of the public from Ballymoney who was out walking their dog in Ballycastle Forest on Sunday afternoon, October 20.

The person said: “Our pleasant afternoon walk was spoiled by two young fellows on scrambler bikes tearing through the forest making a great racket.

“Whilst they slowed up and were careful passing people, it was very off putting and we didn't know what was going to suddenly fly over the hill in front or behind us.

“In the end the noise loud noise ripping through the peaceful forest caused our wee dog to stop walking and our walk spoiled, we returned early to the car.

“Surely there is a safety issue and Forest Service can't allow people to be belting about like that on roads frequented by walkers, of which there were many that day as it was a nice afternoon and the wee car park was totally full?”

Forest Service is part of the Department of Agriculture, Environment and Rural Affairs (DAERA) and The Chronicle put the issues raised to them, with a spokesperson responding:

"The Forestry Lands Byelaws (Northern Ireland) 2013 make it an offence to ride motorbikes in Forest Service forests without permission. No permission was granted relating to the incident highlighted.

"It is also an offence under the Road Traffic Order to ride or drive motorised vehicles off-road without landowner permission and we have worked successfully with the PSNI to identify offenders at a number of forests, however it is a matter for PSNI to decide what course of action is most appropriate when offenders are detected.

“Forest Service is aware that scrambler bikes and quads have frequented this forest on previous occasions and reports on such activity have been forwarded to the PSNI."

Local Sinn Féin Councillor, Cara McShane, has appealed for people to be mindful of all users in Ballycastle Forest and for “improved regulation”, after a number of people had “frightening experiences” recently with scramblers racing on the forest paths.

Cllr Cara McShane said: “I want to take this opportunity to remind the public that while the use of scramblers as a leisure activity can appear to be both exciting and fun, if used inappropriately, can be dangerous and against the law.

“We all need to be mindful that the forest is used for many leisure activities.

“Public spaces and parks are to be enjoyed by everyone, but it is only a matter of time before a serious incident occurs.”