One for the history books! 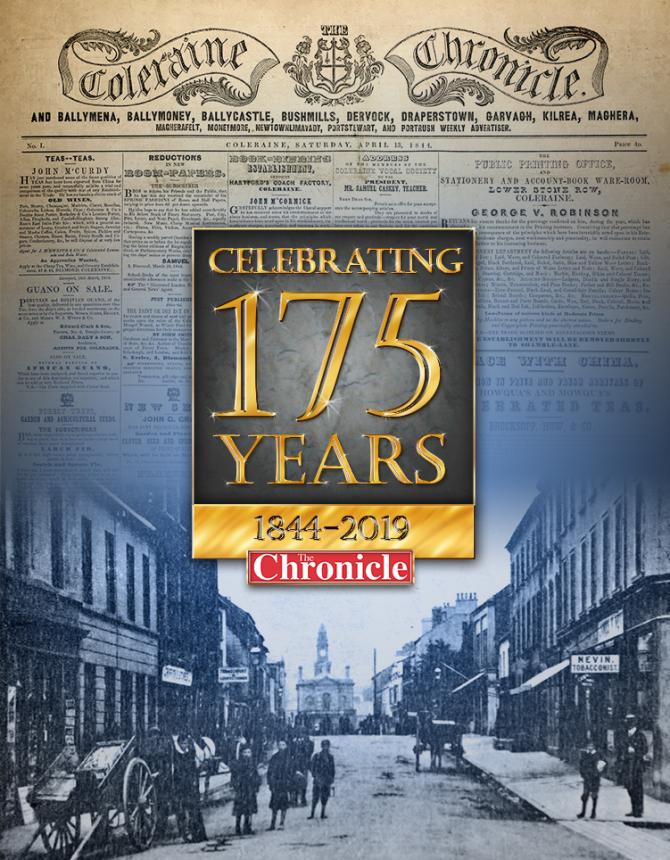 The front cover of our special souvenir supplement which will be in our next edition which is out on Tuesday.

THE Coleraine Chronicle, one of Northern Ireland's oldest newspapers, is celebrating its 175th anniversary next week with a special 32-page souvenir supplement.

A distinctive cover features the paper's first front page dating back to Saturday, April 13, 1844, which was then devoted entirely to advertising.

There are nostalgic contributions from current and former members of staff, including ex-Editors, who provide a fascinating glimpse at how the newspaper industry has changed over the years.

Old photographs and the stories which have made the headlines over the generations are in the spotlight, along with the history of the Chronicle and plans for the next chapter.

As a time when the local press is under more pressure than ever before and titles are folding as social media takes its toll on newspaper sales, the Chronicle has stood the test of time and changed to cater a wider audience.

Editor John Fillis said: “No matter how we get the news out to our readers, one thing remains paramount – trust!

“Readers have to know that what they are reading is true and unbiased, never more so in the age of 'fake news and bloggers.'

“It's why the Chronicle has managed to maintain its position as the most widely read newspaper in town – and just one reason that will continue to see it keeping that position.

“This special supplement is a fitting testament to the loyalty of our readers, staff, contributors, and advertisers down through all those 175 years.”

A bumper 96-page Chronicle will be on sale in the shops from Tuesday morning - don't miss out!