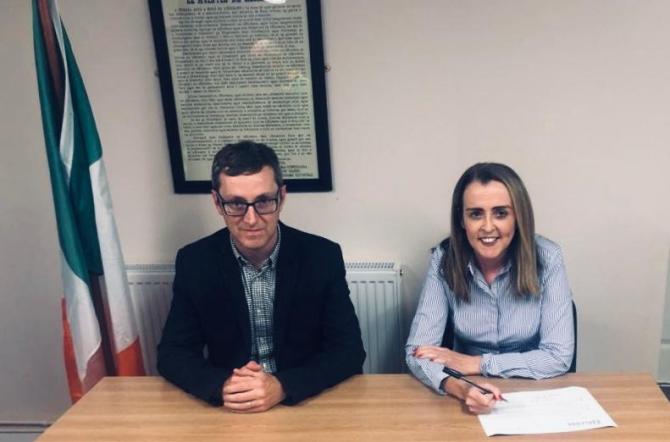 SINN Féin have selected Cara McShane to contest the North Antrim seat in the event of a snap Westminster election being called.

Speaking after her selection at a recent convention Councillor McShane said:

“As we head towards a crash out Brexit spurred on by the chaos at Westminster and the reckless actions of Boris Johnson, it's is obvious there will be an election soon.

“That election will be our opportunity for the people of North Antrim to reject the Tory/DUP Brexit and drive forward momentum for Irish Unity.

“In June 2017, the nationalist people sent a powerful message by turning its back on Westminster.

“Given the catastrophe that Westminster is attempting to force upon our island it is vital that people here in North Antrim continue to show Dublin, Europe and the world that we still reject Brexit, borders and the DUP."

"It was an honour to propose Cara to contest this upcoming election on behalf of Sinn Féin.

"The British Government and the DUP are treating the Good Friday Agreement arrangements and our peace process like a commodity.

"The latest proposals are completely unacceptable and would be catastrophic for citizens and for business on this island.

“I share the strong rejection of local business and industry leaders of these proposals as unworkable, impractical and worse than a no deal.

“Remaining aligned with the EU single market and customs union, safeguarding the progress of the 21 years, protecting business, jobs and the all-island economy remains paramount for the majority of the people of the North, and across Ireland."