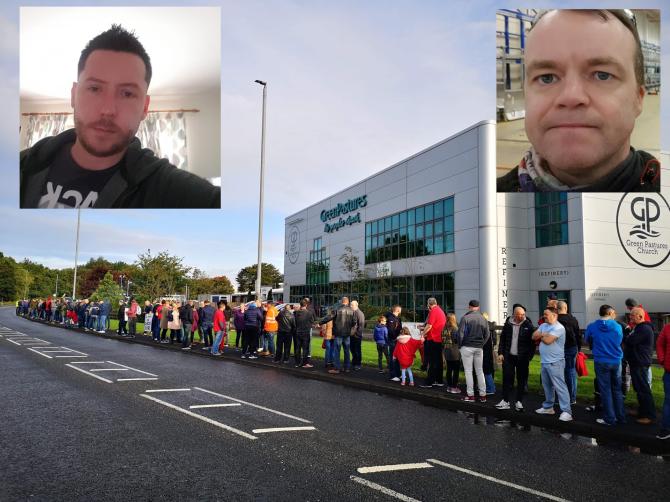 THE DEVASTATING impact of the closure of Wrightbus in Ballymena, with the loss of 1200 jobs last week, has swept through Ballymoney.
Lislagan man Mr Jason Atkinson and former Our Lady of Lourdes pupil Mr Nev Crawford have spoken to The Chronicle about their “shock” at losing their jobs, having been reassured the previous Thursday “not to be worrying.”
“Gutted and devastated by the news,” said Mr Crawford, with the firm eight years.
“Shocked and utterly gobsmacked that they didn't give us our 90 days notice,” said Mr Atkinson, employed there 13 years.
Mr Atkinson joined the protest outside Green Pastures Church on Sunday after it emerged the it had received £15m from Wrightbus.
Sinn Féin MLA Philip McGuigan has written to Invest NI in relation to this.
“Invest NI gave over £5.3m of public money to Wrightbus at the same time as Wrightbus was donating £15m to religious charities,” he said.
The Chronicle also spoke to Cllr John McAuley, who left the firm nearly two years ago, but has family members and friends directly affected.
“There was a minibus left Ballymoney every morning, that's 14-16 people in one vehicle. Every town and village is affected,” he said.
Then there is the knock on affect on suppliers such as Ballymoney firm McAuley Engineering.
Back in early September McAuley's had confirmed to The Chronicle that workers had “temporarily” been put on reduced hours due to difficulties at Wrightbus.
“The company’s order book with other customers remains buoyant,” the statement added.

This week's Chronicle in shops now, has six pages of comprehensive coverage including full interviews with Nev Crawford, Jason Atkinson and John McAuley.