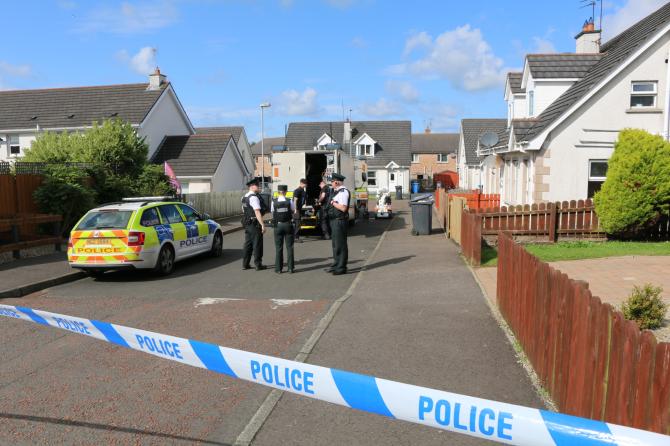 ATO and PSNI officers at Raceview during the security aleart.

THE security alert in the Raceview area of Ballymoney is over, after a number of controlled explosions, with the object being declared an 'elaborate hoax' by the authorities.
50 houses were evacuated just after 10am this morning (Friday Sept 13) with the Joey Dunlop Leisure Centre being used as an Emergency Support Centre.
Chief Inspector Ian Magee said: “The security alert in the Raceview Drive area of Ballymoney has ended.
“ATO examined a suspicious object and have declared it an elaborate hoax.
“In order to ensure the safety of local residents, people from around 50 houses were evacuated earlier. They are now returning to their homes.
“Local people, including children trying to make their way home from school, have been greatly inconvenienced. And I’d like to thank all of those people for their patience and cooperation.
Commenting local UUP Cllr Darryl Wilson said: "Over 50 houses were evacuated and many, many thousands of pounds spent taking care of this situation today.
"Can I thank the PSNI and the ATO for their swift and professional response today.
"It is my hope that this turns out to be an isolated incident and that no further disruption is caused to the local community."
Chief Inspector Magee continued: “I’m also appealing to anyone with information about this incident, to get in touch on 101, quoting reference number 365 of 13/09/19.
“Alternatively, information can be provided to the independent charity Crimestoppers on 0800 555 111, which is 100% anonymous and gives people the power to speak up and stop crime.”