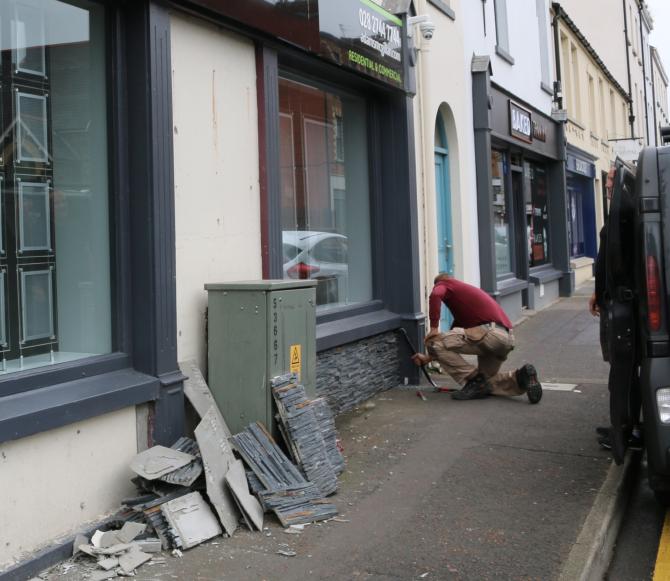 The same workman who helped build the exterior facade at 32 Church Street just a few weeks ago, was removing it yesterday (Sept 10).

CAUSEWAY Coast and Glens Planners have said that no application has been received by them in relation to altering a shop front at 32 Church Street Ballymoney.

Yesterday we ran the story in relation to the decision by estate agents Adams McGillan to pull out of the town, to centralize their business in Coleraine, with images of the new exterior façade being removed.

Planners have told The Chronicle this morning (Sept 11), that a retrospective application for a sign had been received on February 11 this year,

which they say was “contrary to the Ballymoney Conservation Area Guide and Planning Policy,” and “revisions were sought to satisfy policy.”

The spokesperson added that this application was formally withdrawn yesterday (Sept 10).

Explaining their reason for closing their Ballymoney office, part of yesterday's Adams McGillan post read: “We have made a business decision to concentrate our sole efforts on working for our vendors and landlords and not to continue to keep fighting with those who don’t want to listen.”

Exactly one week before they had posted how they had “lost the battle” with planners who they said had taken “massive offence at our exterior,” after they had spent “thousands and thousands of pounds renovating a very damp, very tired old building.”

The Chronicle asked Causeway Coast and Glens Planners to comment on the application at 32 Church Street, with the following response being received this morning (Wed 11 Sept).

“An application for retrospective Advertisement Consent for a sign at 32 Church Street Ballymoney was received on 11th February 2019.

“As the sign, as displayed on the building was contrary to the Ballymoney Conservation Area Guide and Planning Policy Statement 17: Control of Advertisements, revisions were sought to satisfy policy.

“However, the Agent formally withdrew the Advertisement Consent on 10th September 2019 prior to any decision having been made on the application by Council’s Planning Department.

“To date, Council has not received a retrospective application for the shop front at this location for determination.

“However, such works would require planning permission which should have been sought prior to either the erection of the advertisement or the installation of the shop front.”

The Chronicle contacted Adams McGillan in relation to this latest development, and was told that they would be passing no further comment.