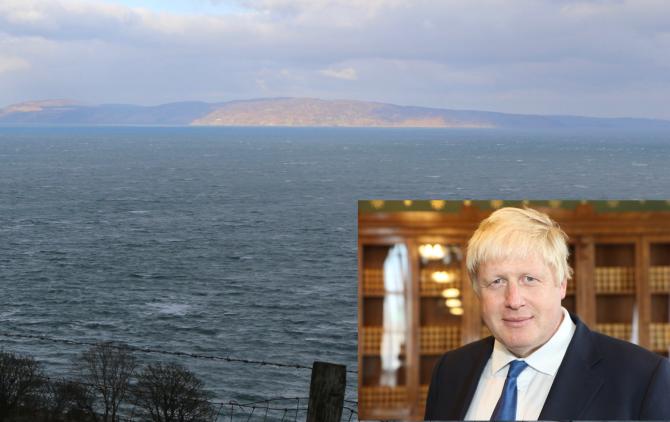 The view of Scotland from near Torr Head, the narrowest point on the Irish sea between Britain and Ireland.

PRIME Minister Boris Johnston is looking into the costs associated with building a bridge between Northern Ireland and Scotland, according to Channel 4 News, with the DUP also involved in discussions.
Their 'Exclusive' report released yesterday (Tues September 10) claimed that documents seen by them revealed that “the Treasury and Department for Transport have been asked for advice on possible costs and risks,” of such a project.
Commenting, a DUP spokesperson told The Chronicle that a feasibility study for such a bridge had been in the party's manifesto for a number of years.

The spokesperson did not rule out the prospect of the Irish end of the bridge being in the Causeway Coast and Glens area.

The closest Northern Irish point between the two countries is at Torr Head, a few miles from Ballycastle.

Channel 4 claim that Mr Johnson has told government officials to explore the possibility of building the bridge.

The report stated that Mr Johnston wanted to know “where this money could come from” and “the risks around the project” which might include WW2 munitions in the Irish Sea.
They also said that the idea was mooted by Mr Johnston when he was Foreign Secretary.
The DUP were also involved in the discussions, it was claimed with the Department for Transport producing a “factual paper on the subject” after conversations between the DUP and former Secretary of State Chris Grayling.
The Chronicle put these points to the DUP, with a spokesperson confirming that undertaking a feasibility study for such a bridge had been in the party's manifesto for a number of years.
The spokesperson continued: “Such a project would appeal to Boris Johnston, he likes ambitious infrastructure projects,” the spokesperson said, “it has undoubtedly been mentioned to him, and it doesn't cost a huge amount to get report done which may throw up some new ideas.”

Asked about the prospect of such a bridge leaving from Causeway Coast and Glens area, the spokesperson said:

“Absolutely! The Larne area has the best road and infrastructure links but engineering challenges would also be a factor in deciding the best route.

“Perhaps somewhere further up the coast nearer Ballycastle could prove to be the most suitable!”