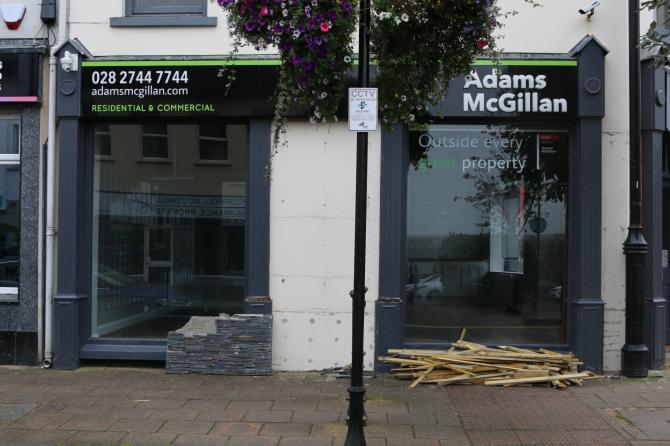 The former Adams McGillan premises at 32 Church Street, with workmen in today (Sept 10) ripping down the new exterior facade just months after it went up, after planning permission was refused.

THE President of Ballymoney Camber of Commerce, Mrs Winifred Mellet has called upon Planning Officers to “get a grip” after a new business to the town has pulled out one week after they said that their planning application for an exterior façade had been rejected.

Speaking on social media earlier today Adams McGillan, who opened their second office at 32 Church Street, earlier this year, said they were now centralizing their business in Coleraine.

Their post read: “We have made a business decision to concentrate our sole efforts on working for our vendors and landlords and not to continue to keep fighting with those who don’t want to listen.”

This news comes exactly one week after they posted how they had “lost the battle” with planners who they said had taken “massive offence at our exterior,” after they had spent “thousands and thousands of pounds renovating a very damp, very tired old building.”

Though the details are as yet unconfirmed by Planning Service, reaction in the town has been swift.

“This didn't come to the planning committee, planners made that decision.

“I understand that this was an enforcement issue, that the applicant had to apply retrospectively and was refused.

“It looks very bad for the town if a business ceases trading because of what seems like a bad planning decision.

“In my personal opinion the exterior looked very well.

“Based on the information I have I am not happy and will be raising the matter both with Planning Officers and at the next Planning Committee meeting.”

Mrs Mellet continued: “The front had been well received with the public, not only reflected by comments on social media but people around the town I have been talking to as well.”