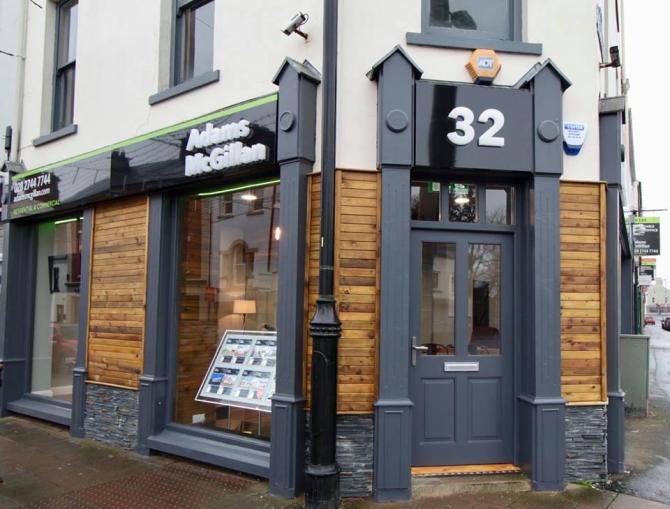 LOCAL estate agents Adams McGillan have lost their battle with planners over the appearance of the exterior of their premises on the corner of Church Street and Victoria Street.

Their social media comment reads: “What a very sad day!

“Anyone who knows us will be aware of the story behind Adams McGillan, we are not a multinational company or backed by someone with deep pockets, we were born of a vision to do things differently. With your support and belief, the past four years have been incredible.

“In early 2019 we saw an opening in the Ballymoney market and decided to open our second branch, this was a massive investment for both of us and the support from local people has been unbelievable.

“Unfortunately, our local planners don't agree. They have taken massive offence at our exterior, having fought tirelessly over the past few months, today we lost the battle. When we say we spent thousands and thousands of pounds renovating a very damp, very tired old building, that is exactly what we did and we are very proud.

“At a time when Church Street and Victoria Street was witnessing an increasing number of vacant units, we invested, those units which were closing are now open and trading with the lights on and has made such a difference to both streets.

“We didn't go for fluorescent pink lights and flashing neon, instead we were sympathetic and introduced indigenous materials such as stone and wood with back lit signage.

“It is with great regret despite our best endeavours that our local planners have insisted that 32 Church Street is an area of historical interest and none of our exterior may stay.

“We are not the type to shout and cry, it is what it is, we thought we would let you know why local planners prefer to move backwards rather than forwards, just as what should be a flash back, we have shown in the pictures the before and after although, with respect, it seems that the before pictures are the shape of the future of what is an amazing town with some of the nicest and most welcoming people.

“We've taken it quite badly, you would yourself, however here we are. Thank you once more for your continued support, we appreciate it especially as we digest today’s news.

“For the avoidance of doubt, we aren't going anywhere, just a 'different' look?”

No prosecutions over murder of Inga Maria Hauser