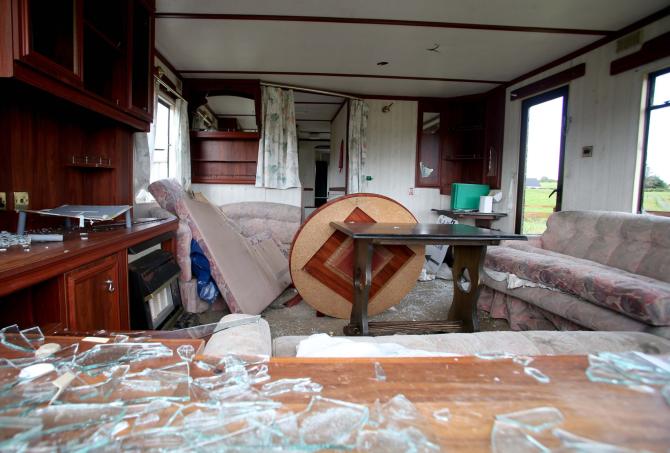 THERE has been widespread outrage at the “disgraceful and pathetic” way in which the club house of a model aircraft club at Armoy's 'Limepark' was written off by “scumbags” in what has been described as “a wrecking session.”
The interior of North Antrim Model Aircraft Club's mobile home was totally trashed, with every window smashed by vandals sometime between midnight on July 26 and 4.30 pm on last Wednesday August 14.
Club member Mr Steven McAuley said: “ It's a bad job, an absolute mess, with the beer cans about obviously some young boys came down and thought they would entertain themselves, there is very little entertainment about it.”
The mobile home, located near the village at the old Armoy Rugby Club site, is used by the club's 25 members and their families, with many in the local community coming down to watch too.
Steven continued: “It's very disappointing, we have been down here for seven or eight years with no trouble. There's less people about and it's more run down since the rugby club closed so that might have something to do with it.”
“We have all ages and backgrounds in the club, people with disabilities, older people come down and sit and have a cup of tea and watch the lads flying, wives and partners use the club house.
“We come from all over, Ballycastle, Ballymoney, Kilrea as well as more locally.
“The club is well integrated into the local community who have always given us any help and support they can.
“Gerry Burns and Armoy Community Association have been working for years to improve things for everyone then these people come down and wreck things, they just had a wrecking session.
“These scumbags can't see anyone else doing anything peacefully and successfully,” he concluded.


For more see this week's Chronicle