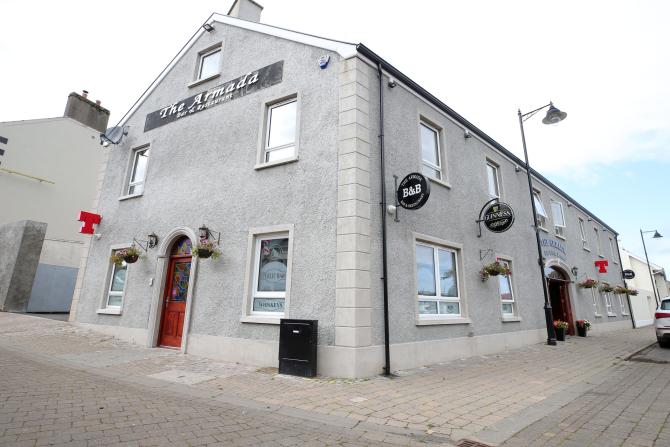 A 48-year-old man has suffered “serious injuries” after being assaulted and run over by a vehicle outside the Armada Bar in Armoy.
The incident took place in the early hours of last Sunday morning (August 18), with four males being arrested on suspicion of attempted murder. The men were later charged with attempted GBH with intent, and other offences, and will appear in court this morning (August 20).
The Chronicle understands that the attack took place after the men were refused entry to an off-licence attached to the premises on Main Street around 1am, before the victim was seriously assaulted and struck by a car that was deliberately driven up on to the footpath.
A number of bystanders were also assaulted by the four suspects, who then fled the scene in the vehicle. The car was later discovered on the Coolkeeran Road, Ballymoney at around 2:20am, with officers arresting four males who were hiding in nearby gardens.
The 48-year-old, who tragically lost his son in a road traffic collision just over a year ago – has since been released from hospital and is recovering at home.
The shocking incident has been condemned by UUP Councillor Joan Baird who said that Armoy residents “live and work together in harmony and peace.”
She said: “I was shocked to hear of the serious incident in Armoy at the weekend when several people were attacked and one man left with multiple injuries.
“I totally condemn such violence and trust that the perpetrators will face the rigour of our justice system. My thoughts are with the badly injured man, the other people who have been caught up in this wanton violence and I wish them all a speedy recovery.
“Armoy is a quiet village where the residents live and work together in harmony and peace. I am certain I can speak for them all in saying we want our Community to continue to enjoy the good relations built up over many years and focus on progress for our citizens.”
In a social media post, DUP Councillor John McAuley said he received reports that the alleged attackers made shouts of ‘Up the RA’ and vowed to return to “sort out a few more” of the onlooking bystanders.
“Thankfully we are not dealing with a fatality following this senseless act of violence,” the statement read.
“Having visited the scene myself, it is clear from the local community that this type of behaviour is neither wanted nor welcome in the village of Armoy, which is proud of its strong community spirit, and there is no doubt that the victim and his family will receive all the support that they need."