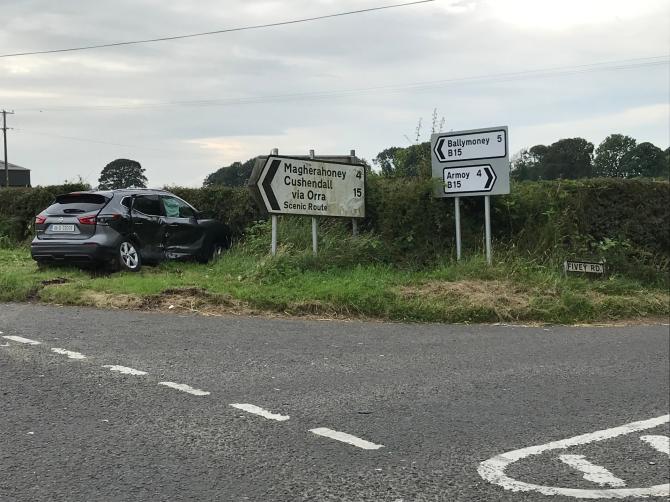 The scene at Walkers Cross on Saturday, after the latest accident.

PRESSURE is mounting on the Department for Infrastructure (DFI) to immediately introduce ‘Stop’ signs at a number of notorious Gracehill Road junctions after the latest accident at the Fivey Road junction known as ‘Walkers Cross’.
One man was arrested, with three people sent to hospital, after the two car smash on Saturday afternoon, the third serious accident in less than a year.
This is the seventh serious RTC on this section of Gracehill Road in the same period, with four others having occurred at the nearby Gracehill Road/ Bregagh Road   ‘Clintyfinnan’ junction.
Now FFA have for a second time written to the Permanent Secretary at DFI, demanding that: “stop signs must go up immediately to stop these tragedies which if unchecked will lead to further loss of life.”
Local representatives have also been speaking out, with Mervyn Storey MLA calling for rumble strips to go on the road, and UUP Cllr Joan Baird accusing DFI of “intransigence.”

*For full story, including the latest DFI statement on the nearby Gracehill Road/Bregagh Rd junction see this week's paper.