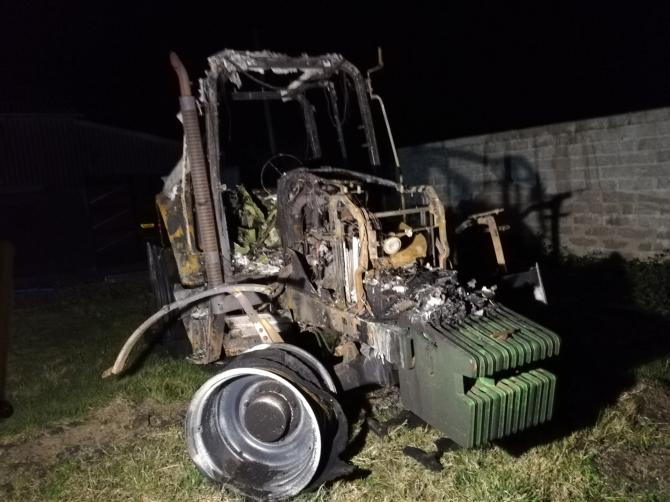 The charred remains of the John Deere tractor that was used in the recent ATM theft in Bushmills.

POLICE have released a statement in relation to the spate of ATM thefts that have occurred across Northern Ireland including one in Bushmills near the end of last month.

Police say that tackling ATM crimes have been a priority for them.

“In recent months we have carried out 41 searches across Northern Ireland during which we recovered over £51,000 and made 15 arrests.

“As a result of these arrests, detectives have now charged 5 men in relation to ATM thefts in Fintona, Antrim and Tully Road, Nutt’s Corner and also charged two men, for other offences including theft, driving offences and possession of criminal property. 6 of these men have been remanded in custody.
“I would like to thank the public for their help as these arrests and charges demonstrate the positive result of the community and police successfully working together to tackle this crime.

“However, in no way does this mean we will become complacent. We continue to focus on doing everything we can to catch those responsible and prevent further thefts of ATMs. Local policing teams continue to patrol areas at night which could be vulnerable to an attack and detectives remain dedicated to investigating the thefts that have taken place.

“I would again appeal to the public to remain vigilant and report any suspicious or unusual activity, such as people or vehicles loitering in areas close to ATMs.

“This remains a key priority for us. The idea that ATM thefts are a victimless crime is simply wrong as these attacks cause untold loss and disruption to people, businesses and whole communities, in terms of the loss of very expensive machinery, delays in production, damage to the local economy. If you hear machinery late at night or in the early hours please call us on the non-emergency number 101 or 999 if you think a crime is in progress. You can also call Crimestoppers anonymously on 0800 555 111.

“I would also appeal to anyone who owns or uses heavy plant machinery - please take every possible step to secure and immobilise your machinery. If criminals cannot steal diggers and other similar machinery, they cannot tear out ATMs.

“I would appeal to anyone who has any information which could help us apprehend those responsible to contact detectives on 101. Alternatively, information can also be provided to the independent charity Crimestoppers on 0800 555 111 which is 100% anonymous and gives people the power to speak up and stop crime."