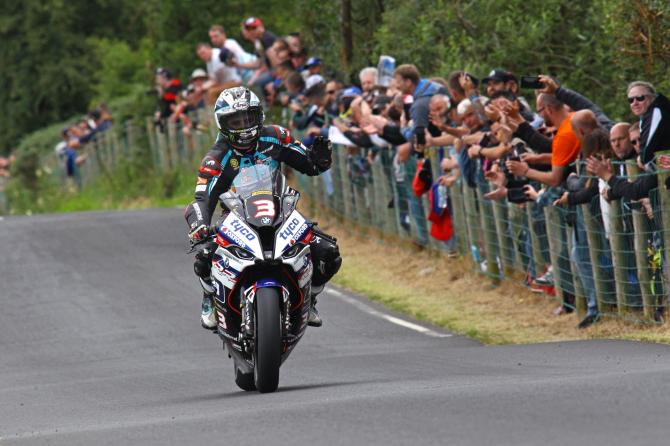 Michael Dunlop pushed through the pain barrier at the Armoy Road Races today as he registered an impressive Superbike double for Tyco BMW at his home circuit earlier today.

The Ballymoney man came from behind in the first Open Race of the day before opening up a healthy advantage at the front. The 30-year-old took the win by over four seconds from Derek Sheils on the Burrows Engineering RK Racing Suzuki with Skerries native Michael Sweeney and Derek McGee completing the top four.

Recovering from various injuries, including a broken pelvis, Dunlop arguably produced his most memorable ‘Race of Legends’ victory to date, coming from behind once again to complete his double and clinch his eighth win in the feature race at Armoy.

The race was initially red flagged after Darren Cooper slid off at Belaney Cross but Dunlop was quick to get back in the groove after the restart before cruising home to a huge applause ahead. Derek Sheils and Derek McGee rounded out the top three as Michael ‘Micko’ Sweeney and Dominic Herbertson battled for fourth and fifth respectively.

In the opening race of the day, Vinny Brennan romped home continuing his dominance in the Junior Support class. Brennan was chased down by Dominic Cottrel, who was on a Suzuki 650 machine but in the end, the County Meath man was no match for Brennan.

Ballymoney’s Ryan Fenton continued his good form in what was only his second ever time racing at Armoy. Noel Smith, Daniel Ingham and German competitor Chris Meyer rounded out the top six. Fenton’s purple patch was to continue later in the afternoon as he clinched the win in the second Senior Support Race putting in another impressive performance to fend off the challenge from Andy McAllister and Friday evening’s victor, Tommy Henry.

The ‘Mullingar missile’ Derek McGee continued from where he left off on Friday evening by clinching a comfortable victory by around 19 seconds in the Moto3/125cc race onboard the trick Faraldo Racing Honda. The race was cut short after the red flag went out on the last lap after an incident at Belaney Cross.

Despite machine trouble on Friday Gary Dunlop came home in second place after the Ballymoney man had to start from the back of the grid, scything through the field to come home in second spot on corrected time.

Florencecourt’s Melissa Kennedy completed the podium places as seasoned competitor Nigel Moore came home in fourth ahead of Chris Meyer and Wayne Kennedy, who returned to action for the 2019 campaign

There was drama on the line in the second Supersport race as Michael Dunlop seemed to stall on the line right before the off. He pulled off to the side of the track before eventually getting restarted but Dunlop was too far back to mount a challenge and retired after completing a couple of flying laps.

Derek McGee completed his hat-trick as he continued to shine around Armoy, cruising  home on the B&W Diamond Edge ZX6R Kawasaki. Michael Sweeney and Derek Sheils battled throughout the 7 lap thriller, however, it was Skerries man Sweeney who managed a steady second ahead of Sheils. Mike Browne, James Chawke and Armoy club member Darryl Tweed completed the top six whilst English newcomer Sam West registered a credible seventh on his Yamaha R6 machine.

McGee looked to have bagged his fourth win of the weekend in the Supertwin race, however, he was to come unstuck after retiring in the latter part of the race with machine trouble on Ryan Farquhar’s KMR Kawasaki. Andy Farrell picked up the pieces by crossing the line in first position ahead of Neil Kernohan, who tasted victory in the Junior Supersport class, and Stephen McKnight.

Fans favourite Dominic Herbertson took the honours in the Frank Kennedy Classic memorial race ahead of Welsh newcomer Mark Purslow and Richard Ford. Englishman Ben Rea was also in the thick of the action during the penultimate race of the day. Ballymena’s Barry Davidson followed up his win in the Junior Classic race with fifth in the feature race.

*Read extensive reaction from around the paddock inside Tuesday's Chronicle.