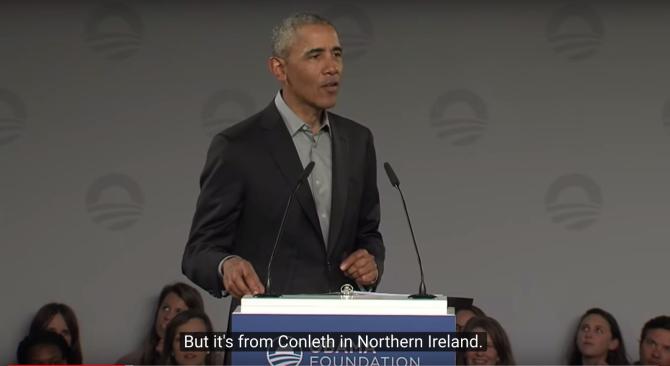 Former President of the United States of America, Barack Obama, recently answered a question sent to him from Armoy man, Conleth Burns. SPB17-04.

IT’S fair to say that it’s not often that you get a question answered by the former President of the United States of America.

However, Conleth Burns, who hails from Armoy, had that experience recently as a question pitched to Barack Obama was heard by millions of people across the globe.

The 21-year-old, who studies law at New College, University of Oxford, spoke to The Chronicle to explain his interest in politics and how being involved in the Armoy Community Association has helped to bring those from different sides of the political divide together for a better future - something which he hopes can be replicated  across Northern Ireland.

“I’m currently preparing for my law finals and I was at home for a break and was catching up on the Brexit crisis of the day,” he said.

“For a number of years, I’ve volunteered for Armoy Community Association and have seen the real value in people coming together and working together.

“I’ve seen how great it is when people from different backgrounds and communities come together and trust one another, become friends with one another and build a new way forward.

“Having been part of that journey of building trust and moulding consensus, I find it frustrating when our leaders aren’t doing that, especially when you can see like I have in Armoy, the real benefits in bringing people together.”