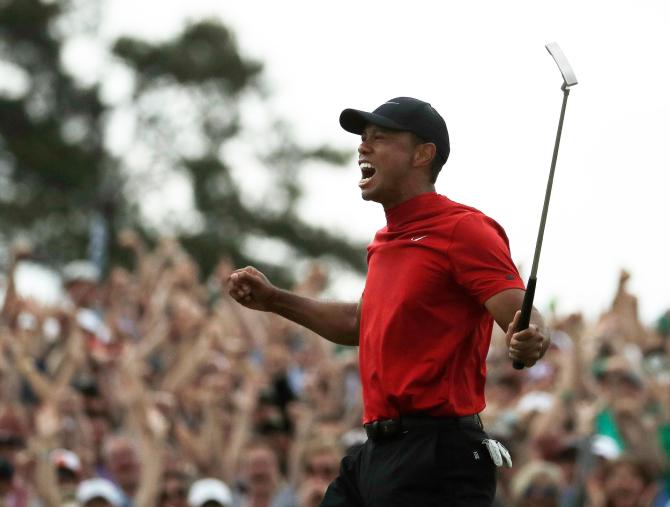 Tiger Woods celebrates after winning his fifth Green Jacket at Augusta on Sunday.

TIGER Woods is on his way to The 148th Open at Royal Portrush this summer as the Masters champion.

Amidst incredible scenes at Augusta on Sunday, Woods claimed his fifth green jacket after seeing off the challenge of Open champion Francesco Molinari and US Open champion Brooks Koepka on a dramatic final day's action.

Tiger's victory brings to an end an 11 year wait for a 15th major title in what many are proclaiming to be the greatest comeback in sporting history.

Woods, once the undisputed world number one, had fallen as low as 1,199 in the world at one stage as his career was threatened by injury and personal problems.

However, he showed signs last year that his game was coming good and much of the old swagger was evident down the closing stretch in the season's first major.

He now catapults up the world rankings and will be a major player in May's PGA Championship and the following month's US Open.

Given the way he demolished a stellar field to clinch victory at the weekend is it too fanciful to suggest that Woods could once again dominate his rivals as he did in his pomp?

No-one knows the answer to that question, but what is certain is that organisers of The 148th Open at Royal Portrush will be delighted with Tiger's renaissance.

July's tournament was already being talked about as possibly being one of the greatest in the event's history: with Tiger Woods on the prowl again that seems almost certain.