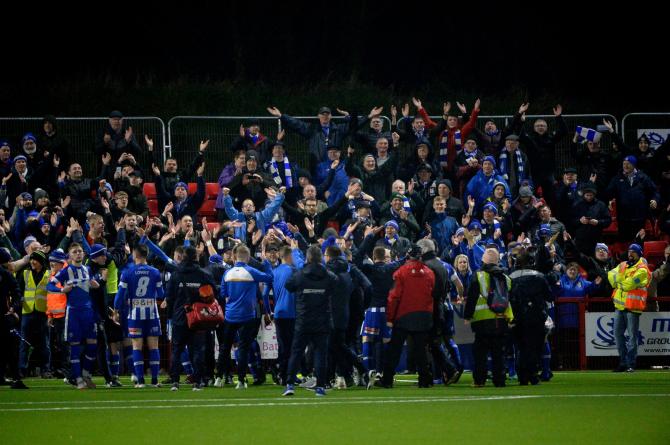 LORD of the Rings; Star Wars; The Godfather: all memorable trilogies.

Add to that list, Larne v Coleraine in the Irish Cup.

For sheer drama, it's hard to beat the rivalry between the two clubs in domestic football's premier knock-out competition.

Friday evening's quarter-final meeting at Inver Park is the third time in as many seasons that the teams have met in the tournament.

But while the cameras are back for more of the same, some of the principal characters have changed.

The most notable absentee is former Bannsiders' boss Rodney McAree, on the sideline 12 months ago but who departed the scene last summer after just a year in charge.

Back in the director's chair is Oran Kearney, the man who led Coleraine to Irish Cup success in 2018 before departing for a brief sabbatical in Scotland with St. Mirren.

His return has already produced dividends: the team lifted the Bet McLean League Cup earlier this month and are neatly tucked in behind leaders Linfield in the Danske Bank Premiership.

A place in the last four of the Sadlers Peaky Blinders Irish Cup would guarantee a thrilling last act of a dramatic campaign.

However, in opponents Larne, they face a group determined to avenge the two previous reverses. The Reds are also a team in form.

Backed by the spending power of Kenny Bruce, manager Tiernan Lynch has assembled a blockbuster squad which enjoys the benefits of a full-time professional set-up. In contrast, Coleraine are more of a low-budget affair.

But what the Showgrounds' side lack in financial muscle they more than make up for in character.

The Bannsiders have shown they have the mentality to win important games, the come from behind cup final defeat of Crusaders a perfect illustration of a growing maturity.

Does he go with talisman Eoin Bradley up front? The striker missed last week's 4-0 win at Institute because of a lingering hamstring problem. Should he have recovered sufficiently, then it would be no surprise to see him come straight back in.

Midfielder Aaron Jarvis is another on the comeback trail from injury. He has featured to varying degrees in the club's last two games and it would be a major boost if he was selected alongside Stephen Lowry in the engine room.

Left-back Aaron Traynor might not make it, having picked up a shoulder injury in the League Cup final. If unavailable, expect Adam Mullan to move across to cover with club captain Stephen O'Donnell resuming his highly effective central defensive partnership with Aaron Canning.

This evening's game may have come too early for Ben Doherty as he battles back to full fitness while January recruit Stewart Nixon is cup-tied, having played for Carrick Rangers in a previous round.

However, fellow January transfer window signing, striker Curtis Allen, is available for selection, having not played for former club Glentoran in the competition.

So, the stage is set for a real thriller. The two previous cup meetings have produced 12 goals, Coleraine ahead 8-4 on aggregate, but it could be that the game fails to live up to its billing.

"I can't anticipate that it'll be the same kind of game as last year," admitted Coleraine captain Stephen O'Donnell.

Whatever way it pans out, the game promises to keep the sold-out Inver Park crowd and those watching at home gripped to the final credits.

The way good drama should.