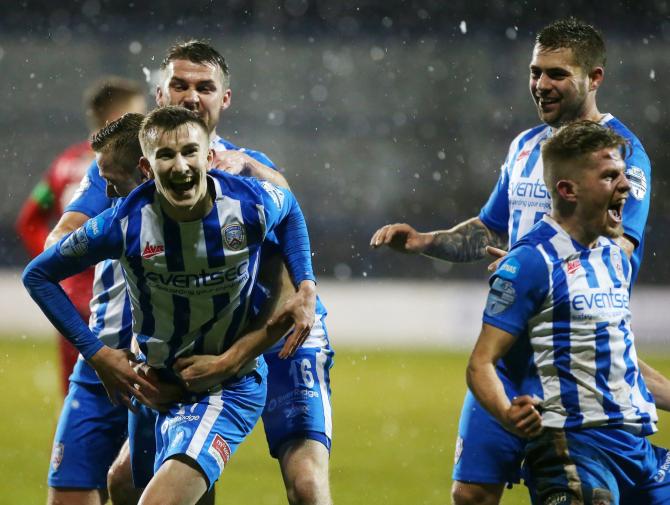 Alexander Gawne celebrates after scoring the only goal of the game in the win over Cliftonville.

That's all that counts at the end of the day.

Alexander Gawne's speculative strike almost 20 minutes from the end was enough to see Coleraine bag a first in three attempts against Cliftonville this season.

In a game of few chances, sub Gawne's cross/shot deceived Reds' keeper Richard Brush and ended up in the back of the net, much to his delight.

"Thankfully we got the goal and managed to get the win," admitted the teenager afterwards.

"There wasn't many chances and it always felt that one goal was going to win it.

"It doesn't matter how it went in - for me, all that matters is the ball ended up in the net and we won the game - and it was a vital win for us tonight against another top six team.

"I think all the games coming up now before the split are going to be very tight and every point is vital in the race for the title.

"I'm really pleased with how the season is going for me. I've scored a few goals but it was even better that the goal against Cliftonville was in front of the Railway End.

"The goal I scored against Carrick Rangers here earlier in the season was at the opposite end but tonight I got to see the fans go mad when the goal went in," he added.

The Bannsiders showed two changes to the team which defeated Warrenpoint Town 4-0 in their previous league outing with Lyndon Kane coming back in after suspension and James McLaughlin starting up front in place of the injured Eoin Bradley. Gareth McConaghie also missed out, nursing an injury.

Given the close nature of the previous meetings it probably came as no surprise that clear-cut chances were at a premium, with respective defences on top.

In Aaron Canning and Adam Mullan, Bannsiders' boss Oran Kearney has chanced upon a wonderful pairing, arguably the best in the league.

And with club captain Stephen O'Donnell and Gareth McConaghie in reserve, central defence is one area where Coleraine are well covered.

Further forward the resources are not quite as plentiful but one thing you can't accuse the current group of players of is lack of commitment.

Whatever permutations are deployed, they collectively bust a gut for the cause and they did so again in front of the SKy cameras on Monday night.

Matthew Fitzpatrick and James McLaughlin led the line with gusto in the absnce of Bradley, nursing a hamstring strain picked up in the win at Milltown, while the midfield quartet didn't allow their opponents to settle all evening.

Ben Doherty limped off with what appeared to be a hamstring concern to be replaced by Ian Parkhill while Josh Carson battled on bravely for a large part of the game before being withdrawn. Kearney admitted afterwards that the former NI international had been struggling all week to be fit.

It's that belligerence which got Coleraine over the line against the Reds and which will further tested as we reach the business end of the season.

Coleraine get a break from their pur suit of a second Gibson Cup this weekend as they entertain Banbridge Town in the sixth round of the Sadlers Peaky Blinders Irish Cup.

Following that, it's the small matter of a trip to the Oval to face Glentoran for yet another vital Danske Bank Premiership match.

It's gonna be an exciting end to the campaign whatever happens.