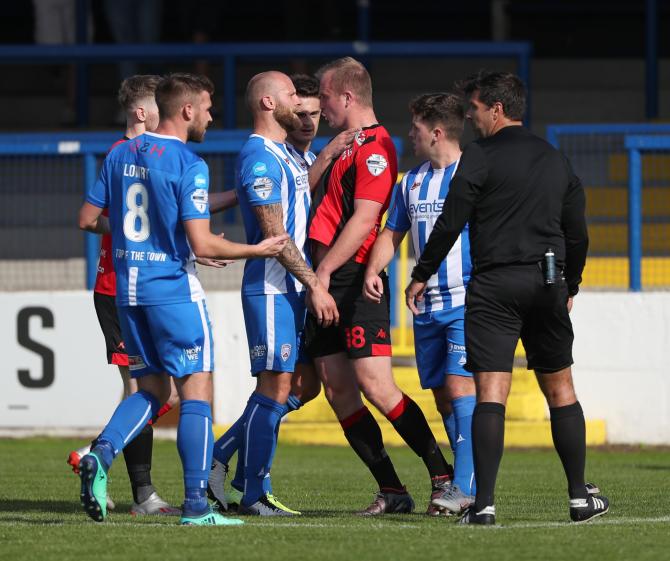 Games between the two are usually hard-fought affairs.

COLERAINE will look to continue their recent good form against Crusaders when the pair meet in front of BBC cameras at The Showgrounds on Friday evening.

Oran Kearney's men have won the two previous league meetings this season - a 4-2 home win in September followed by a 2-0 win at Seaview a month later.

A hat-trick of wins over Stephen Baxter's side would catapult them to the top of the Danske Bank Premiership table, overnight at least, with current leaders Cliftonville not playing until Saturday.

However, it won't be easy against the north Belfast club who travel north determined to reverse the recent trend and lay down a marker for next month's Bet McLean League Cup final.

Both teams come into the game on the back of a busy period over Christmas and New Year - and in good form.

The Bannsiders are unbeaten in their last four games, their last defeat coming against Cliftonville before Christmas, while Crusaders have won their last three games.

In fact, the Crues have scored 12 goals and conceded none in those three games as they look to mount a challenge for the Gibson Cup in the second half of the season.

Coleraine, too, have been mean in defence, keeping clean sheets in their last two outings, thanks to the partnership of Aaron Canning and Gareth McConaghie at the centre of defence and the industry of full-backs Lyndon Kane and Aaron Traynor.

In front of them, the midfield has undergone a number of changes in recent week with the absence through injury of regular starters Aaron Jarvis and Ben Doherty.

The former Institute man has undergone surgery for a knee problem and is on the road to recovery while Doherty is making good progress with a hamstring injury picked up over the holiday period. He may even be in line for a recall this evening.

Friday's game marks the opportunity for Coleraine fans to get a look at former Belfast Celtic man Matthew Fitzpatrick. The ex-Antrim GAA star signed a pre-agreement with the Bannsiders last year but has yet to feature for his new club.

"Matthew brings a lot of good attributes - he has done really well at Belfast Celtic, he's an athlete and he will fit into the way we play and go about our business," said Bannsiders' boss Oran Kearney.

"He's a really good fella too and we look forward to getting him out and seeing what he can do."

Going the other way is striker Nedas Maciulitis who returns to former club Annagh Utd on loan until the end of the season as the manager looks to freshen his squad.

It's believed the Ballymoney man is looking to bring in at least one new face as the team battles on three fronts.

A large crowd is expected under the Friday night lights on Ballycastle Road as the hosts seek to maintain a long unbeaten home record, stretching back to April 2017.

Keep up to date with all the developments on line and on social media.