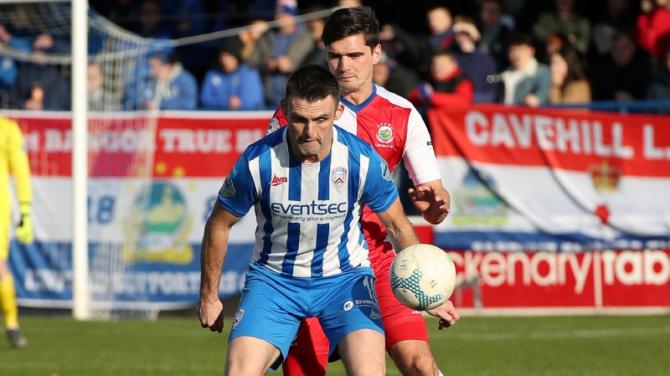 But I didn't realise just how poor it was until I began trawling through the record books.

For one has to go back 32 years for the club's last success in the competition, then known as the Roadferry Freight League Cup.

Indeed, the 1-0 final win over Portadown on November 28 1987, in just the second year of the tournament, remains the Bannsiders' SOLE League Cup success.

What's worse is that the club holds the joint record for most final defeats – five in all – the last of which came against Crusaders seven years ago.

And if that wasn't bad enough, Coleraine also hold the dubious distinction of jointly suffering the heaviest defeat in a final, 4-0, against Linfield in 2000.

On the flip side, Tuesday's semi-final opponents Linfield are the most successful team in the competition with 10 wins and three runners-up finishes.

But, if we're looking for a glimmer of hope, which we are, then we can take comfort from the fact that Jim Platt's men defeated defending champions Linfield in the semi-final on their way to lifting the cup 32 years ago.

A tight game finished 0-0 before the Showgrounds side prevailed 4-3 on penalties to set up a final clash against Portadown who defeated Larne 4-3 in the other last four tie.

The decider was also a cagey affair, a single goal from striker Sammy McQuiston securing an extra-time win.

In 1993, Bangor defeated Coleraine 3-0 while 12 months later Linfield prevailed 2-0 in what was then the Wilkinson Sword League Cup.

The Blues were again to prove Coleraine's nemesis in their next final appearance in April 2000, inflicting a heavy 4-0 defeat in the Coca-Cola League Cup.

A decade passed before the club’s next final appearance, a heart-breaking 4-1 loss on penalties to Glentoran after the match had finished 2-2. The competition then was known as the Co-operative Insurance League Cup.

Two years later, in January 2012, and it was Crusaders who dashed supporters' hopes, a single Chris Morrow strike the difference between the teams in a decider played at the Ballymena Showgrounds.

That defeat came in the early days of Oran Kearney's managerial reign and was notable among other things for the additional temporary seating installed at Warden Street to satisfy demand among Bannsiders' supporters.

Since then, Coleraine have struggled to make much of an impression in what is now the Bet McLean League Cup.

But, hope springs eternal, which means we go into this evening's last four game optimistic of overturning that wretched record.

For example, Linfield and Coleraine have met twice in the league this season, with the provincial side winning on both occasions. A resounding 4-2 victory at the International Stadium in August was followed by a 1-0 win at home in October.

Of course, cup games are different animals, but there can be no doubt that those two victories will have a bearing on proceedings at Windsor Park this evening.

Psychologically, Oran Kearney's men know that they have the beating of their much-vaunted opponents, even in their own back yard. Indeed, it could be argued that Coleraine players relish playing on the wide-open expanses of the international stadium.

The only concern for the manager is team selection, particularly in defence. Injuries have disrupted preparations, with captain Stephen O'Donnell, the impressive Adam Mullan and Gareth McConaghie all carrying knocks.

Aaron Canning, a revelation since moving across from right-back to centre-half, missed Saturday's league game at Institute because of suspension but will be avaialble for selection.

Midfield virtually picks itself, with Stephen Lowry and Aaron Jarvis manning the centre and Josh Carson and Ben Doherty operating down the flanks.

Up front, there is a decision to be made: does the boss go with Eoin Bradley as a target man, with Jamie Glackin offering support, or will he be tempted to partner Bradley with James McLaughlin in a two-pronged attack. My feeling is that he will opt for the Bradley-Glackin combination.

The Omagh man has emerged as an important player after taking time to settle following his move from Crusaders back in January and is central to Coleraine’s style of play.

That leaves plenty of attacking options on the bench, with the likes of McLaughlin, Ian Parkhill, last week's hero against Carrick Rangers Alexander Gawne, Nedas Maciulitis and Emmett McGuckin all in contention.

Veteran Steven Douglas, who I'm sure must have a League Cup winners' medal in his pocket from his time at Windsor, will provide defensive cover should it be required.

Linfield are the current League Cup holders following a 1-0 win over Ballymena Utd in last season's decider but they won't relish facing the league leaders as they seek to make it back to back finals.

A positive start from the visitors is required: Linfield fans can be a fickle bunch, particularly at home, and an early goal would heap pressure on David Healy’s players who have been on the wrong end of a few results this season.

Coleraine’s hunger to reach a final should be enough to see them through to a meeting against either Crusaders or Institute who meet in the other semi-final.