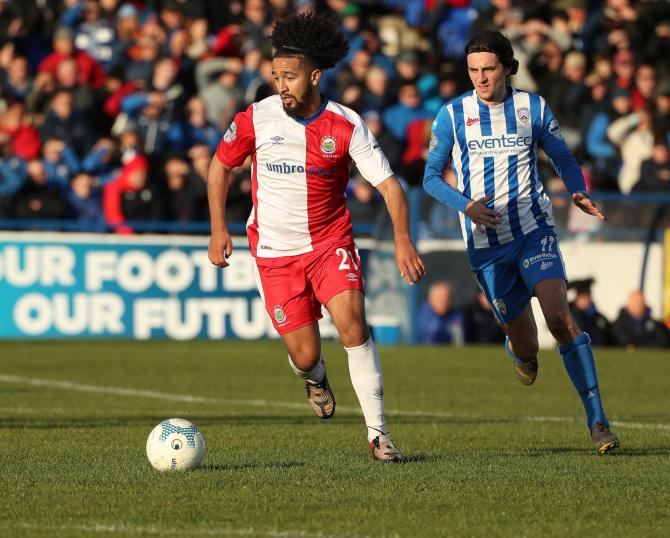 Midfielder Jamie Glackin, set to face one of his former clubs this weekend.

DANSKE Bank Premiership leaders Coleraine will look to strengthen their grip at the head of affairs when they visit Dungannon Swifts on Saturday.

The Bannsiders visit Stangmore Park on the back of a big win over Championship club Dundela in the Bet McLean League Cup in midweek.

Manager Oran Kearney made a number of changes to the starting line-up on Tuesday night but it is expected Saturday's team will be along similar lines to that which defeated Linfield 1-0 a week ago.

Coleraine and Dungannon met in the league back in September when James McLaughlin scored four times in a comprehensive 5-0 win.

However, it should be noted that the teams were deadlocked 0-0 at half-time and it was only after the break that the home side were able to pull away.

Kris Lindsay's side are always a difficult proposition on their own patch, a fact that will surely feature in Oran's pre-match team talk.

The home side will also be smarting from a heavy defeat at Solitude in their last league outing but, again, that was a match the Swifts were competitive in for large parts.

Dungannon have won just four of their 13 league games to this date, drawing two and losing seven and are currently eigth in the league table with 14 points.

Coleraine, of course, continue to set the pace with 29 points from their 13 games. They are yet to taste defeat in the league, winning eight and drawing five.

They also boast one of the meanest defences in the division, conceding just nine goals, while they are equally impressive at the other end of the pitch, scoring 31 goals.

In contrast, the Swifts have scored just 16 times and conceded 33.

The stats, then, point to an away win but we all know sport can be unpredictable. All Coleraine can do is control the controllables.

The Bannsiders have reached the summit through a relentless attitude to their work which has served them well to this point.

There are no stars in the team; rather, it is the collective spirit which makes them such difficult opponents.

It won't be easy, but I fully expect Coleraine to extend their winning run this weekend.

Elsewhere on Saturday, Crusaders are fancied to defeat Institute at Seaview, Linfield should get back to winning ways at Carrick Rangers while the Mid and East Antrim derby between Ballymena Utd and Larne at The Showgrounds could end all square.

Bannsiders supporters will be praying second-placed Cliftonville drop points away at Glenavon while Warrenpoint, under returning manager Barry Gray, may find a resurgent Glentoran too good at Milltown.

Keep up to date with Coleraine's fortunes at Dungannon Swifts on Saturday afternoon through our social media channels.