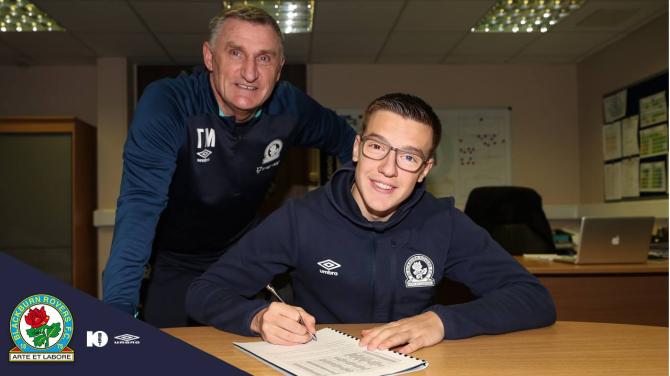 Lyons, 21, put pen to paper on an 18 month contract with the Lancashire club on Friday, describing signing the deal as a 'dream come true.'

The Ballymoney man joined Rovers on loan at the start of the season and has impressed with a series of stand-out performances for the club's Under-23 team.

"I'm 21 years old and this is my first ever professional contract, so I'm absolutely delighted.

"It's a massive deal, coming from part-time football back home to now signing my first pro deal. It's a great feeling, but I've worked hard for it and I feel like I've deserved it.

"But signing the deal only means that I've got to push on more and more, and fight to try and get in the first team," he added.

Lyons made over 100 appearances for the Bannsiders during Oran Kearney's time in charge at the Showgrounds before going across the water at the end of the summer.

He has starred for former NI international Damien Johnson's Under-23s, scoring three goals in 13 games, including two in a 4-0 win over Arsenal, displays which have earned him the chance to train with Tony Mowbray's first team squad.

"I've trained with the first team over the last few weeks and that's made me hungry for more," continued Brad.

"It motivates me to push on, so every time I get an opportunity to train with the first team I just get my head down and work hard and hopefully there's more to come.

"Since I've been here, the club has been brilliant. The facilities are quality, it's run like a Premier League club, so the end goal is to get into the Blackburn Rovers first team."