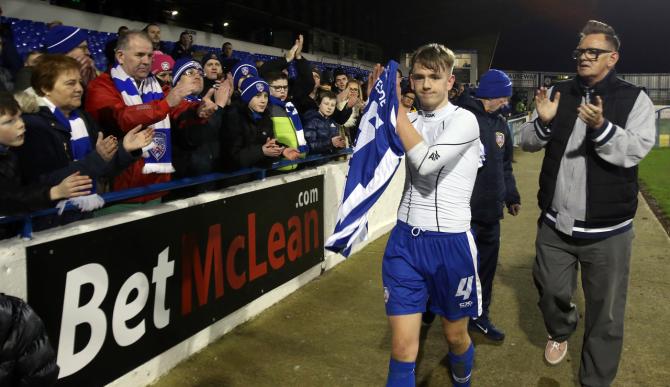 Ciaron Harkin received a hero's reception from Coleraine supporters as he departs the club to re-join his boyhood club Derry City. wk01117mb

IT was a New Year's Day to remember for all associated with Coleraine FC as the Bannsiders enjoyed an emphatic 4-1 win over Cliftonville.

Speaking to Chronicle Sport after his side's recent success, Coleraine manager Rodney McAree said: "For us to get ten points from a possible twelve over Christmas is fantastic."

“If someone had have offered us that prior to the last four games I would have taken their arm off for it.

“Unfortunately we did not get all twelve but we did run it very close and there are huge positives to take from that," he said.

The Bannsiders looked to have got back to their free flowing style of play against Cliftonville on New Year's Day and McAree has called for more of the same as Coleraine prepare for the second half of the season.

“I thought our first half performance against Cliftonville was exceptional and apart from a fifteen minute spell at the start of the second half I was very happy," said McAree.

“We have certainly turned a corner with results as we are now four games unbeaten with an Irish Cup tie to look forward to.

“One thing that we have tried to focus on in recent weeks is hard work and making sure that we are delivering our best.

“We have a lot of quality footballers in the squad and Jamie Glackin and Ben Doherty coming in will only add to that," he added.

The Coleraine boss also paid tribute to midfielder Ciaron Harkin who played his last game for the club before making the move to North West neighbours Derry City.

“Unfortunately we lose Ciaron Harkin who has been exceptional since I have joined the football club." said McAree

“Ciaron has led by example and he is still only a young kid and he has an opportunity of going to Derry City which is his home town club and the team he supports.

“I wish Ciaron all the success in the world and he joins Derry City with my best wishes and the door is always open should he wish to return," he added.

Next up for the Bannsiders is this weekend's Irish Cup clash at home to Harland and Wolff Welders. The holders will be aiming to start their defence of the cup off in the best possible manner with a straightforward victory.